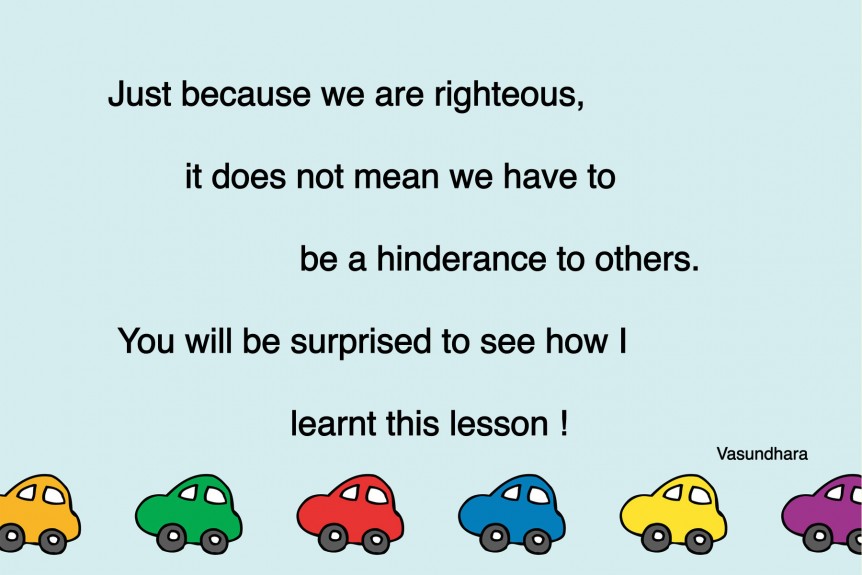 Looking Good!
Men and Women, Can we be Friends?

Lesson I learnt from a Policeman

Several years back, one fine day, I was driving on a quiet road. The weather was balmy and the tune on the radio was sweet. The road was practically empty. It felt like I was the only one out there in the world. And the car I was driving pretty much made it tempting for me to go faster than the speed limit. Usually I drive close to the speed limit. Or I keep looking in my rear view and side view mirrors to make sure no police car is anywhere near me!!

Well, this time somehow I missed and the Law got me! Perhaps the Police Officer was hiding in one of those side roads waiting for someone to make a mistake! May be, his boss told him that if he did not get so many number of tickets, he would be fired! So he must have been gleaming with joy when he saw me merrily go past him over the speed limit. Soon there was this flashing light behind me and I knew I better go to the side and stop.

The Officer got out of his police car, came to my car and stood by my car window.  He drew out his Ticket pad and pen and said to me, “Ma’am, do you know you were driving over the speed limit?”.  I said, “Sorry Officer! I didn’t know. I have never received a ticket before. Could you please let me go this time with a warning?” He said, “Ma’am! I can’t do that. We are rounding everyone today! Can I see your Driver’s License?” I gave my Driver’s License to him. He eventually said, “Ma’am, here is your ticket!” (Blast him!)

He then continued, “You do have to pay for the ticket. But you can do one thing to avoid this ticket going on your record!”.   I asked, “What can I do?” He said, “You can take a class. Then this ticket will not go on your record.” I said “Okay!” and got the details from him. He finished my miserable experience by saying “Good Day Ma’am! And drive safely!” He left, and I left too, cursing the guy for ruining my day!

Now comes the part where I come to the point about the title of this article, “Lesson I learnt from a Policeman“. You see, sometimes you need to know the background of an event before getting to the actual event. That’s what I have provided so far.

So, I attended the class a few weeks later. There were quite a few others too. It gave me vicarious pleasure to know that other people’s days were also ruined!! I am just kidding!! What happened to your sense of humor?

Besides a few hours of boring lectures and many yawns, there were also a few good tips about driving safely.  Then the time came for quizzes. The Police Officer who was teaching the class asked everyone a question or two and mostly was happy telling them that they were all wrong and correcting them! Then my turn came up. The teacher asked me, “If you were driving according to the speed limit on the fastest lane, and there is a car behind you tailgating you to make you go faster, what should you do?”

Well, I just got a ticket for speeding!  So I righteously said, “I should stick to my speed limit, and continue to drive. Right?” I really thought that the Officer would be proud of me. Instead he frowned. With irritation on his face he said, “No! You should not do that. What if the person in the car behind you had an emergency? What if a woman was having her baby and going to the hospital? They may be going fast because they had to. They may not mind getting a ticket. So what you should do is to move to the slower lane and let them go their way on the faster lane.”

Wow, I was impressed.  That was so true. Even though the policeman was annoying, he had a point. Just because I want to do the right thing it does not mean that I have to hinder other people’s actions. They can follow their own reasoning of right and wrong according to their situation, circumstances or beliefs. If they break the law, let the law take care of it! But I should not take the law into my own hands! What a lesson to learn! And this lesson holds good in every aspect of life: “Live and Let Live! Do not interfere in other people’s business!”

Looking Good!
Men and Women, Can we be Friends?
VasundharaLesson I learnt from a Policeman09.07.2015