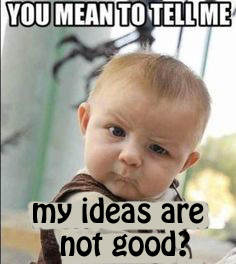 Using foul language...what's the big deal
We love ourselves more than others...but...

I keep reading more and more news bits about how a teenager gets enrolled in colleges. Recently I heard that a teenager sophomore is so smart and brainy so that he got enrolled in Stanford for Ph.D studies. I wanted to prepare you for even further shocking news than this. You see, soon you could see a Baby Toddler in Kindergarten get enrolled in Harvard for the highest academic program they offer! Let’s call her or him B. Toddler.

Imagine how it will be when B. Toddler attends classes at Harvard! Of course, the first thing Harvard has to do is to hire a Nanny. They would also have to carry a good supply of Pacifiers. They need to construct a separate room with a variety of Toys and a small Crib to take a nap. Naturally, an area to change Diapers becomes mandatory.

BT may be so cute and irresistible that some Baby Talk may become inevitable now and then. But remember, BT is a genius. So instead of “Ga Ga Goo Goo Ma Ma Da Da”, “Alpha Beta Gamma Kappa” should be used.

On the other hand, once in a while, he may behave like an incorrigible brat. However, don’t throw Baby BT along with the bath water! Consider it as a genius being eccentric. They both pretty much annoy us the same way!

Let’s not forget the real purpose for BT being in Harvard, i.e., highest education. So a High Chair and a Mini Computer to suit BT’s size should be made available. But there is a chance that BT may not know how to read and write. So a Stenographer and a Typist to take notes of BT’s Ideas is a must.

Also, the Prof better agree with the Toddler, or else a Temper Tantrum might occur. Oh, I forgot, Candies should be strictly forbidden from the campus, or at least BT’s wing. Otherwise, distraction could ruin the main thesis, which for all we know could be for stopping all natural calamities from occurring!

When Dr. B. Toddler accepts the Degree at graduation, the Chancellor of Harvard better be careful. Otherwise, instead of the BT’s cradle being robbed, the Chancellor’s job might be robbed by BT. That’s Professor B. Toddler for you, if you don’t mind!

Using foul language...what's the big deal
We love ourselves more than others...but...
VasundharaToddler in Harvard11.13.2014